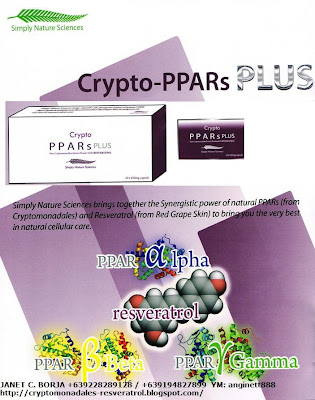 CRYPTOMONADALES - RESVERATROL plus is the perfect health food and natural remedy produced by the sophisticated manufacturing process under the sponsor of scientific and medical groups in the most prestigious medical research institutions in Taiwan: the National Health Research Institute and Institute of Technology and Information Science in Taiwan.

Cryptomonadales - Resveratrol plus contains natural products rich in natural PPAR (peroxisome proliferators activated receptors) agonists and grape skin extract resveratrol, the two most promising health and nutrition molecules in the 21st century. PPARs molecules have been documented to play important roles in metabolic syndrome (obesity, hypercholesterolemia, hypertension and diabetes), anti-inflammation and immune disorders (asthma, eczema, psoriasis, rheumatoid arthritis, systemic lupus erythromatosis), and cancer (prostate, breast, hepatoma, etc.).
Resveratrol could additionally upregulate the longevity gene SIRT-1, prevent from ageing and prolong the life span for up to 50% in C. elegans, fly and fish. Resveratrol can also upregulate PGC1-a, the co-activator of PPAR-r and act in a synergistic way with PPAR agonists. Therefore, the combination of PPAR agonists and resveratrol in this product Cryptomonadales - resveratrol plus have synergistic effects to promote health, and to treat metabolic syndrome, cardiovascular diseases, immune disorders, ageing and cancers, all of which represent the major diseases in the 21st century.
Cryptomoandales and PPARs will be introduced in detail on their nutritional and medical values mainly from our researches in Taiwan, and followed by the introduction of Resveratrol.

Resveratrol (3,4,5,'-trihydroxystilbene) was first isolated from the roots of white hellebore (Veratrum grandiflorum O.Loes) in 1940, and later in 1963 from the roots of Polygonum cuspidatum, a plant used in traditional medicine. In 1992, resveratrol from red wine skin was found to have cardioprotective effects. Since then, resveratrol become the most actively studied molecules. Series of studies revealed that resveratrol can slow or protect the progression of a wide variety of illness, including cardiovascular diseases, stroke, as well as enhance stress resistance. In 1997, resveratro was shown to have cancer chemopreventive activities.

The most exciting finding for resveratrol is the extension of life span in C. elegans, fly and fishes. The mechanism by which resveratrol exerts such a range of beneficial effect across species and diseases model is interesting and now under active investigation. The life span extension is found to be mediated through the longevity gene SIRT-1, which is upregulated under calorie restriction. It has been known since 1930s that a severe lowering of calorie intake can dramatically slow the rate of ageing in mammals and delays the numerous diseases of ageing, including cancer, cardiovascular diseases, diabetes and neurodegeneration.

The most unexpected and interesting observation for resveratrol is the upregulation of PGC-1a, the co-activator of PPARs. This finding links PPARs and resveratrol to become a good partner for nutrition and medical remedy for preventing or treating many human illness including cardiovascular diseases, stroke, metabolic syndrome, inflammatory and immune disorders, ageing, and cancers. The potential effects of longevity is of course the most attractive effects of the combined products.


RESVERATROL AND CANCER
In 1997, Jang and collegues published a seminar paper reporting the ability of resveratrol to inhibit skin carcinogenesis at multiple stages. Since then, systemic administration of resveratrol has been shown to inhibit the initiation of growth of tumors in a wide variety of rodent cancer models. The fficacy of low doses (200 ug per kg body weight daily in a rat model of colon carcinogenesis suggests that even the concentration of resveratrol obtained from dietary sources, such as red wine, could be therapeutic in some cases. At higher, but pharmacologically achievable doses, the protective effects of resveratrol are even more dramatic in many cancer models.  Resveratrol can inhibit cyclooxgygenase to reduce the risk of developing many cancers. Resveratrol can also inhibit tumor-induced neovascularization at a dose of 2.5-100 mg per kg of body weight. Another mechanism for resveratrol to inhibit tumor formation is to induce cell cycle arrest and apoptosis possibly through the induction of caspase 3.


RESVERATROL AND HEART DISEASE, MYOCARDIAL INFARCTION AND STROKE
The effects of resveratrol on heart disease has been observed on the low frequency of cardiovascular disease in French who enjoy drinking red wine, despite a diet rich in saturated fat. Wine and grape extracts have been shown to decrease platelet aggregation, prolong vasorelaxation, suppress arteriosclerosis, reduce lipid peroxidation, and improve serum cholesterol and triglyceride concentrations. Resveratrol has been shown to be effective at protecting isolated rat heart against ischemic/resperfusion injury, probably due to its anti-oxidant effect. This effect is important for preserving the heart in myocardial infarction and stroke.